Between December 2007 and June 2009, the United States experienced the most severe recession in the postwar period. The over 4 percent decline in the gross domestic product (GDP) was only reversed more than three years after the beginning of the recession.

During a recession, there is a liquidity crisis. This means that there is not enough money in circulation, and cash resources are in short supply, and demand is high. During a liquidity crisis, businesses and consumers are charged high-interest rates on loans if they are even available.

What happens to all of the wealth lost in a recession? Does it just disappear?

No, wealth changes hands. Those who are not prepared and have little or no margin are those who lose wealth and assets in a recession. Those who prepared and positioned themselves for a downturn not only make it through but are the benefactors of being able to buy assets at on-sale distressed prices.

Today the economy appears on the surface to be robust. The unemployment rate is at a 50-year low, and the stock market is near an all-time high.

The markets historically cycle. What goes up, must come down. The question is, “when?”

No one has a crystal ball that can tell us. Statistically, the odds of the market going down is much higher than the odds of it continuing its upward movement much longer.

But this time is different…or is it? It is different. Since 2008, the national debt and deficits have continued to explode. Interest rates have been reduced twice in the last three months by the Federal Reserve desperately trying to keep the economy going.

I have the opportunity to sit in rooms with some of the most astute investors and businesspeople in the nation. Many of them, including myself, have experienced and survived (with scrapes, bumps, and bruises) at least one significant market cycle downturn or reset.

There are specific steps that you can take now while there is still time. You can prepare, position, and prosper in the next market downturn and wealth transfer.

1. Get lean and mean. Personal and business. What expenses and labor can you cut or consolidate? Do you really “need” everything that you currently own that costs you time to manage and the capital required to maintain? (Note: it’s far easier to make cuts now when it is not dire or urgent, or when you may be distracted putting out other fires).

2. Debt. Payoff or move to long-term fixed financing. Be very wary of reliance on short-term debt or lines of credit (they are the first to go in a downturn). Volatile or short-term financing is a major cause of financial stress during recessions.

3. Your business model. Be swift and replace any client, customer or patient base, employee, vendor, or merchant that is stealing your time, and not profitable. (This is a HUGE one and so few business owners are courageous enough to do this).

4. Marketing. Most business owners never get this right. Attempts are sporadic and without focus; rarely measured for real ROI. For most small business owners, marketing is underrated, underutilized, and misappropriated.

5. Cash flows and profitability. In the last innings of the longest bull market in history, there is much exuberance. Many are confident in expansion modes, using excessive debt leverage, leaving them with slim margins. With a recession, it can be game over. Get real with your numbers. If you don’t know them or they aren’t reliable, get some help now. You can’t effectively run any business if you’re flying blind. You have to be able to survive a credit and cash flow gap that will last eighteen to twenty-four months.

6. Stress-test your cash flow projections at different reduced levels. What happens with a 10% decrease in cash flow? 15%? 20%? How far can you go before you’re in trouble? What could you be doing now (see #1-5 above) to put yourself in a better defensive position?

7. Liquidity. Now would be an excellent time to have some dry powder on hand (cash or near-cash equivalents). During a downturn, cash is king. If you have it or ready access to it, it’s a gamechanger. Cash is required not only for survival but also to take advantage of the distressed assets that will be on sale.

8. Multiple income streams. You should have cash flow beyond your primary business source of active income. It’s impossible to predict which cash flows may be affected more than others. Don’t be dependent on just one. (Hint: real estate does this exceptionally well).

9. Flexibility and adaptability. The game is won by those who can move on a dime, pivot, and make tactical shifts when needed to survive. Having margin allows for positioning to take advantage of the “blood running in the streets” from distressed sellers of assets who didn’t make the moves in #1-8 above.

The markets are cyclical. We can’t time the markets or predict when a market will cycle. But you can hedge the odds.

The Freedom Founders Elite Mastermind began preparing for a market cycle over a year ago. Our members are positioned to weather the storm and be opportunistic with business and investment acquisitions when the time is right.

There will be another wealth transfer. By making prudent moves, you can decide on which side of the transfer you will be. You can either give up wealth or receive it. You can choose. But you have to take action. Now.

The Most Influential People In Dentistry (For Me)

A Word From Steve and Woody

A Moment of Truth. 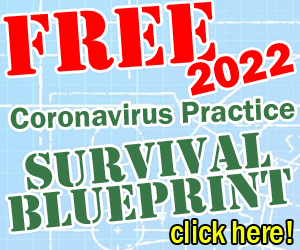